Tea Parties, Taxation and the power of the popular movement 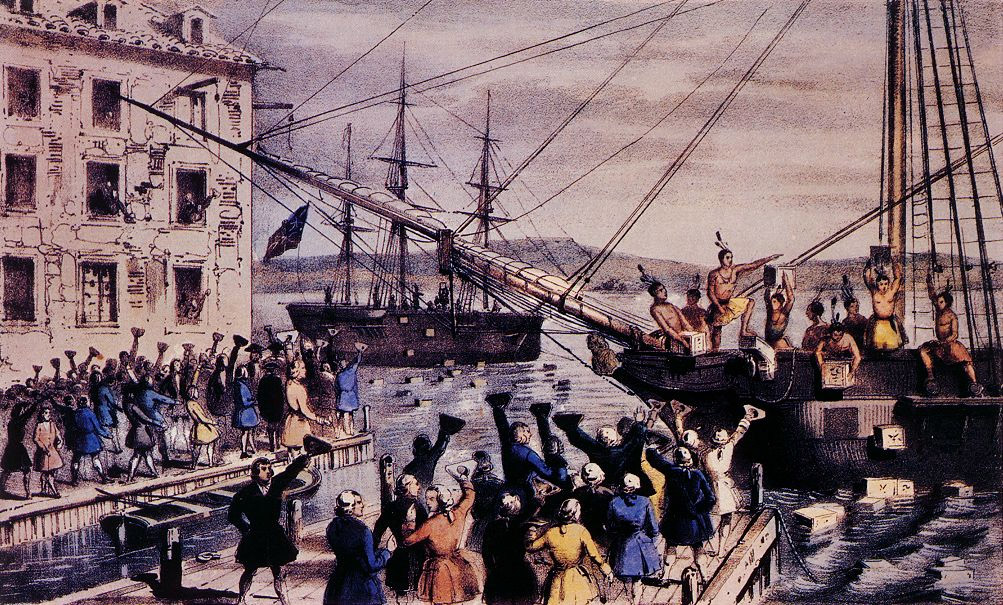 When politicians try to find a compelling name for a new initiative that they are about to launch, the results are nearly always both inept and inapt: the act of conscious deliberation by various policy wonks and spin doctors seems, unsurprisingly,  to doom the newly-named programme to eventual or even immediate derision. ‘Back to basics!’; ‘No more boom and bust!’; ‘A land fit for heroes!’ These carefully crafted slogans are no sooner spoken aloud than they are haunted by the echo of hollow laughter.

In your guts, you know he’s nuts!

But when a genuine popular movement takes shape; when a theme or phrase emerges, apparently without forethought, and is taken up by large number of people as a telling expression of what they are feeling and thinking . . . at this point, the heads of government should sit up and take notice. They should also feel afraid, because these phrases are the very stuff of rebellion (of every political hue). ‘No taxation without representation!’; ‘Hey, hey LBJ, how many kids you kill today?’ ‘In your guts, you know he’s nuts! – the marvellous unofficial slogan against the 1964 Presidential campaign of Barry Goldwater (the official slogan: In your heart, you know he’s right! )

‘The Tea Party’ — the simple phrase for a new American political movement, has the same, popular feel about it. Nobody has focus-grouped this. Somebody, some years back, called their little local political get-together to protest about government taxation and spending plans ‘a tea party’. And everybody got the point.

The problem, for the American establishment, is that every American knows exactly what a ‘Tea Party’ represents: direct action against unfair taxation by an overbearing state. Whoops! Is there anybody in this world who doesn’t feel, even just a little bit, that they are being overtaxed by an overbearing state? The other special joy of the Tea Party is that there is more than a little bit of anarchy about the movement. Policies? Who said we had policies? Just a bunch of like-minded folk . . . don’t have to agree about everything . . . just muddling along, minding our own business and stirring up trouble . . .

Revolution in the air

The unique history of the American people has given them, for very good reasons, an undying belief in what the individual, and a community of like-minded individuals, can achieve without much (or any) support from a central government. Pick your own favourite scenario from across the centuries: the early Pilgrims from England fighting for survival on America’s east coast; the earliest communities, creating their own societies and legal frameworks; the frontiersman and woman wresting a living out of the forest or the plain; the wagon trains heading West into unknown territory, carrying the law with them in the form of their own constitutions; communities of miners agreeing on new systems of property rights, settling disputes and dispensing justice via a form of total democracy.

Now – you might well argue – things have got a lot more complex than that; we don’t live in small communities any more, where everyone tries to be self-sufficient, where people help out neighbours who are having a hard time and you can settle any community issues by holding a Town Hall meeting. It’s all got much bigger. We need government to look after the nation as a whole.

I’m just not sure that Americans quite believe that to be true. I think that they believe that the old independent pioneering spirit still represents the right way to run the country. Which is a polite way of saying that they think that government should get off their backs, and which is an important part of the complicated reasons why America is, and will almost certainly remain for the foreseeable future, a leading economy.

The original Boston Tea Party of 1773 was brought about by an exceptional piece of high-handedness and pig-headedness (exceptional even by British standards) on behalf of the British Prime Minister of the time, Lord North. The British had already been forced to back down from their attempt to tax the British citizens of the thirteen American colonies by levying duties on glass, tea, paint, paper and lead.  An earlier Stamp Act imposing a tax on official documents had already been repealed. The American colonists’ point of view was very succinctly put by a certain George Washington.

“I think the British Parliament of Great Britain has no more right to put their hands into my pocket, without my consent, than I have to put my hand into yours, for money.’

No taxation without representation! was the cry.  Most of the new taxes were again repealed, after unrest and the deaths of five British colonists in disturbances in Boston in 1770. But the British government was determined to maintain the principle of their right to tax the colonies; the tax on tea remained. When the government also gave the British East India Company the right to trade directly with America, and waived the duty that the company had to pay for import of tea into Great Britain itself, this meant that tea could be sold in America at a lower price than local smuggled tea (tea that was smuggled into America, as it was into Britain itself, from Holland, where the was no import duty on tea). The colonists would be delighted! Why, they might not even notice the tax of three pence per pound that would be levied on the sale of tea to the colonies! (The British government tried hard to make the payment of taxes by the American consignees of the shipments of tea as discreet as possible.)

But the colonists did notice, they were not seduced by the lower overall tax on the new tea from Britain, and they stuck to the principle that there should be no taxation without representation.

The people of Boston refused to unload the tea and, being Americans, called a mass meeting, which resolved to send the tea back to Britain without paying the duty. The British Governor of Boston refused to allow the ships to be sent back. A meeting of around seven thousand Bostonians met at the Old South Meeting House and, later that evening, a group of them chucked all of the tea into the harbour, ruining it. This was not a merely symbolic act: the tea was worth about £10,000 at the time – roughly £1 million ($1.6 million) in today’s money. The British imposed martial law on Massachusetts; the American War of Independence was about to begin.

When a popular movement spontaneously calls itself the Tea Party movement, you have a pretty good idea what’s going on in members’ minds. The movement may well embrace a wide variety of issues and a wide spectrum of opinion, some flakier than others. But the things that The Tea Party is definitely about include taxation, the role of government, fairness, and self-reliance.

The new establishment in Washington has a lot to worry about.  Those pesky colonists are making trouble again . . .