The modern organisation came into being towards the end of the eighteenth century, during the Industrial Revolution in Britain: a revolution in the means of production, fuelled by coal and symbolised by the steam engine, a remarkable new source of power.

The way in which those early organisations were structured and managed has remained more or less in place to the present day. It has been refined by ‘management science’ and made ever more efficient, but it is has essentially the same old management and workforce, command and control, reward and punishment structure that still would be recognisable to a factory worker in the closing decades of the eighteenth century.

We are going to call this kind of organisational structure the ‘steam engine’ organisation, in homage to the Industrial Revolution’s iconic new source of mechanical power.

But the steam engine organisation was designed and built for a different era.

Our steam engines are no longer fit for purpose. They must be transformed.

The ‘workers’ in modern organisations are no longer, or should no longer be, required to perform routine tasks – regardless of whether these tasks are manual or mental. We are all knowledge workers now.  What is required for success in the modern era is our ingenuity; our fresh ideas; our active collaboration.

My Steam Engine is Broken explores ten ‘paradoxes’: ten things that steam engine organisations continue to do that are directly preventing the very outcomes that the organisations freely admit they most need.

Radically changing the way that any organisation is structured and run, even a small organisation, is a daunting task. We will not be able to transform the steam engine overnight. But we can change it, little by little, bit by bit, until it has been transformed beyond all recognition.

We have, after all, progressed from steam engines to space travel. But not overnight. And not all in one go.

Johan C. Aurik, Managing Partner and Chairman of the Board, A.T. Kearney
My Steam Engine is Broken provides a map for executives seeking to lead their organizations through the challenges of today and tomorrow. The key, as the authors assert, is with people. Most organizations don’t just compete on products or services—they compete on culture. Nothing is more pertinent, and nothing is more challenging to grow and nurture. This book argues that we need to radically reassess many of the organizational behaviours that we have taken for granted for so long in order to create a culture that is appropriate for ‘The Age of Ideas’. The book is full of passion and offers important messages on organizational change through building an extraordinary culture that will drive long-term success.

Tracey Camilleri, Associate Fellow, programme director, The Oxford Strategic Leadership Programme, Saïd Business School, University of Oxford
We talk of a knowledge economy but in 2014, knowledge only gets you to the starting post. It is the ability to learn and to relearn that keeps organisations relevant now. Organisations are simply groups of people. However, many large organisational structures are founded on the fantasy that, at best, they are well oiled machines. The job of leadership is to hire great people, to tease out a shared purpose from them and to allow, to encourage, to forgive their talents, hopes and mistakes in the service of this purpose. This is not idealistic hogwash – it is the only efficient and sustainable path to the future. Instead, sitting astride the machine, like a great sit-on lawn mower, leaders curtail, smother and silence those talents. This is not deliberate – it is because the tyranny of the idea of the heroleader persists and the fear of mess, the difficulty of measuring curves over straight lines, the fear of not seeming certain – lead leaders back to the safety of the machine, reaching for levers. But this idea is not safe. Quietly, the mavericks first, then the creatives, the young talented, disillusioned, the entrepreneurial, the round pegs, the senior women, the future leaders, the explorers and navigators are jumping ship and leaving the very institutions that need them most. Already they are heading for the door, leaving behind the grids and the grisly metrics, the fallen language and the powerpoint, the KPI’s and mandated behaviours to pursue different, more human, ideas of what success looks like. None of this is new. This is a book, however, that calls on leaders to put on their overalls, roll up their sleeves and start loosening the bolts of their organisations. It’s a book that invites bravery and imagination to rethink organisations in a way that will make them fit for the future and fit, crucially, for the most talented young people to join and thrive in.

Anthony Fitzsimmons, founder and chairman, Reputability LLP
As the steam-engine age progressed, the tendency grew to analyse business as a blend of mechanical and measurable factors. Reality is not so simple. As individuals we are biological and we behave both rationally and with predictable irrationality. Since organisations run on people power, this applies equally to organisations. Most leaders recognise that it is their people that make their organisations great. Few, however, recognise how easily undesirable human behaviour, including their own, causes catastrophic failure. The unwillingness to find, visualise and fix these unmeasurable, and predictable, behavioural and organisational risks leaves organisations – and their leaders – unnecessarily vulnerable. Thus we see patterns of failure that are repeated again and again.

Piers Ibbotson, founder, Directing Creativity
Creativity flourishes at the edges of things. It needs boundaries and it needs constraints. The world of business has been described to me as “amoral,” as if our behavior there need not concern itself too much with ethics. There is an affinity with the idea of selfas-scientist rather than self-as-artist; that what is necessary for good business leadership is clarity, precision, measurability and emotional detachment. These qualities are not necessarily wrong, but they are not always appropriate to the business of getting good ideas out of people and implementing them. And they exclude consideration of the deeper values that people express through the work they do and the choices they make.

Karen Phelan, business author; consultant; co-founder Operating Principals
An oft-quoted phrase, misattributed to Einstein, is “The definition of insanity is doing the same thing over and over and expecting different results.” While used mainly to denounce political rivals, it does accurately describe the business management practices of the last two decades. In recent surveys of CEOs about their biggest concerns, they ranked innovation, engagement, and talent development among the top. These are the same problems that ranked among the top over a decade ago. The biggest difference between then and now is the number of consultancies, initiatives, methods and media devoted to solving these problems. Why aren’t they working? Because lack of innovation, talent, and engagement are not problems, but symptoms – symptoms of command and control management practices that arose in the industrial age. The industrial age needed warm bodies to follow standard procedures quickly and efficiently. Because the work was mind numbing, monetary incentives were needed to keep people working hard. However, today we are firmly entrenched in the information age where we need intelligence, creativity, curiosity, collaboration and a sense of purpose to succeed. While companies understand this in the abstract, they still rely on the tried and true practices developed centuries ago. In order to create the workplaces and the work forces that make the most of the human capacity to learn and create, we have to abandon command and control management. This change will require a leap of faith, jumping from the familiar practices that we know don’t work to a world of uncertainty and experimentation. Leaping into uncertainty is never easy, but if enough people jump, more will follow.

Peter Rawlins, founder, Rawlins Strategy Consulting; former Chief Executive, London Stock Exchange
This little book is not for the faint-hearted. It is no less than a Luddite charter, promoting the complete destruction of traditional command and control structures as a necessary precursor to embedding the creativity, innovation and connectivity required in organisations suited to the new age of ideas. Bracing stuff!

John Willshire, founder, Smithery Ltd
You would have thought that with everybody going on about the ‘pace of change’, the rise of the digital economy, endless leadership initiatives and billions of pounds spent on consultants, today’s organisations would all be thoroughly evolved entities – agile, adaptive and zen-like in their ability to make things happen at will. But not a bit of it. As the authors point out – and to borrow a phrase from Philip Larkin – we are still witnessing a long sigh out of the nineteenth century. Leaders continue to talk about ‘levers’ to pull as if they’re running a machine, ‘delivering’ as if they were in charge of a post office, and ‘execution’ as if they managed a military phalanx. So there’s a mismatch between the rhetoric and the reality. It’s about time the gap was closed, and one way is indeed to change the language. No more steam trains and ‘efficiencies’: the machine metaphor has served us well but it doesn’t work anymore.” Robert Roland Smith, philosopher, author and business advisor
“There is no one answer, is there? The way to change the way we work together is to consider just what a complex, interconnected organism we generally find ourselves in, and then think about the array of little nudges and tweaks that might start to effect some changes somewhere else. Telling an organisation what to do won’t do it. You might as well try and tame a murmuration of starlings. 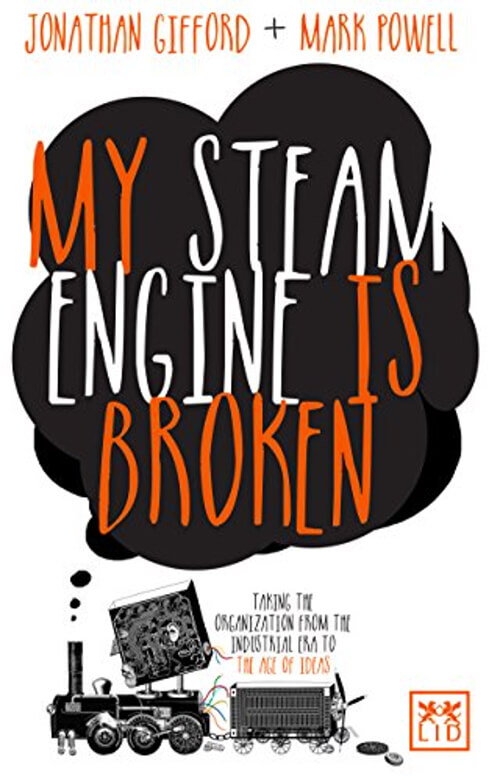