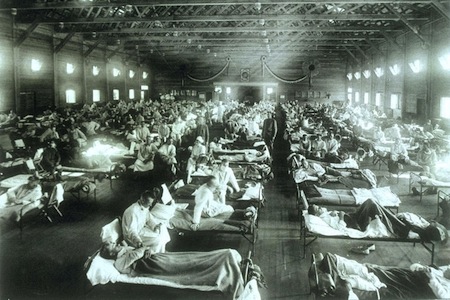 This article was first published on History News Network in 2012. I’ve changed the title to reflect our current realities but I haven’t updated the article itself – which is now a bit of a museum piece!  I must confess that I think that ‘unreasonable optimism’ was less to blame for our lack of preparedness for COVID-19 than a failure of governments to prepare adequately for a pandemic than scientists have consistently told them was bound to occur — in some form or other — in the very near future. Which turns out to be now.

A disease that killed more people than the First World War.

As the 1914-18 First World War entered its closing stages, a terrifying new virus swept across the world, killing more people than the conflict itself. The disease may have emerged in Kansas, in January 1918. By March it had reached the US army camp of Fort Riley, with hundreds of troops reporting sick. The shipment of troops to Europe may have spread the virus there and beyond. With near simultaneous reported outbreaks of the disease in Europe, Africa and elsewhere in America, and a possible earlier outbreak in Austria, we may never know the exact origin of the deadly virus. The total number of deaths caused by the pandemic as it spread around the world is now estimated to be between 50 and 100 million, whereas the number of deaths caused by the Great War is generally accepted to be around 16.5 million, and a significant number of these deaths were caused, in 1918, by the disease itself.  Communities were completely blindsided by the outbreak of the disease, and felt – as did the victims of the Black Death in the Middle Ages – that the world (or at least civilisation) was coming to an end.

Should we be worried about the outbreak of another vicious pandemic that may kill us by the million? Yes, we should. There will, without a shadow of doubt, be new viral pandemics that kill huge numbers of people around the world, facilitated by the dramatic and relatively recent rise in global air travel. Will we actually fret about this on a daily basis? No, we will not. Should we? Well, possibly not. Neuroscience is beginning to reveal why we are so unrealistically optimistic – for intriguingly positive adaptive reasons. And luckily, since we are not just an unreasonably optimistic but also a very clever species, we have a potential solution up our sleeves: the supra-human organisation.

Bring out your dead!

The 1918-19 pandemic came to be known as ‘Spanish Flu’ only because Spain was not a combatant in the war and had not imposed press censorship. Combatant countries were not about to tell the enemy that soldiers and civilians were dying in large numbers from an outbreak of a mysterious, killer virus. The world did, however, learn that King Alfonso XIII of Spain was suffering from an illness that was also affecting many of his subjects, and the term ‘Spanish Flu’ was born.

While the earliest, first wave of infections by the new influenza virus was relatively benign, the next wave was unbelievably deadly. Doctors thought that patients were presenting symptoms, not of influenza, but of dengue fever, cholera or typhoid. Patients haemorrhaged blood from the nose, stomach and intestines; from ears, beneath the skin and inside the eye. Some were partially or even completely paralysed. The disease also caused a rapid and catastrophic failure of the lungs. Patient turned blue and died within hours.

As the disease in its most virulent form spread across the world it seemed as if the Black Death had returned. In many American towns and cities panic set in, made worse by the fact that it was public policy to deny that there was an epidemic. The public health commissioner of Chicago said, in 1918, ‘It is our duty to keep people from fear. Worry kills more people than the epidemic.’ People were prevented neither form worrying nor from dying. In Chicago’s Cook County Hospital, 40% of all influenza admissions died. In Philadelphia, dead bodies remained for days in houses without being collected.

Eventually, trucks and horse-drawn wagons were sent out and the call of, ‘Bring out your dead!’ was heard on the streets of America in the twentieth century. As with the Black Death, neighbours refused to help stricken neighbours; a society that prided itself in neighbourliness began to fall apart. The Red Cross in Kentucky reported that people suffering from the disease were starving to death because their neighbours were too frightened to take food to them. Another Red Cross report wrote that, ‘A fear and panic of the influenza, akin to the terror of the Middle Ages regarding the Black Plague, [has] been prevalent in many parts of the country.’  There were very real fears that society, and civilisation, were on the brink of collapse.

Viruses can ‘cross species’ to humans: birds and pigs are the most likely source. These viruses tend to make us very ill, because our immune systems do not recognise them, but they are unable to spread from human to human. The real risk comes if a victim is infected simultaneously by both human flu and bird or pig flu, allowing the two viruses to exchange genetic material. Now we have a virus that can be transmitted from human to human: we have an epidemic. It is inconceivable, in an age of unprecedented global travel, that we will not suffer another pandemic at some point n the future, probably relatively soon.

So, why are we not more worried?

The neuroscience of unreasonable optimism

A study led by Tali Sharot explored the neuroscience of ‘unreasonable optimism’ and showed that our brains have a built-in tendency to focus on good news, and to suppress bad news. Let’s say that you think that your chances of getting cancer in your lifetime are 40%. If you are then told that the average figure for people from the same socio-cultural environment as yourself is actually 30%, then your conscious mind wakes up and takes note. ‘Jolly good!’, it thinks. And when asked on a second occasion what the probability of contracting cancer might be, the subjects in this experiment tended to confirm that their personal likelihood of getting cancer was more like 30%. But in cases where we had underestimated the chance of getting cancer – perhaps at only 10% – and are then given the bad news, then our brains are far less interested.

To use the neuroscientist’s own words, there is ‘diminished coding of undesirable information about the future’. Our brains, whether we like it or not, seize on good news about what may happen to us and tend to discount bad news. Using functional magnetic resonance imaging (fMRI) to pick out the areas of the brain that are most active while we process information like this, neuroscience reveals that it is essentially our emotional, pre-conscious brain that is taking care of businesses when we are presented with information that makes us stressed and unhappy. We are not really ‘taking decisions’ about such information at all; the brain merely declines to process it.  The good news is that this keeps us in good mental and physical shape to face the challenges that life puts in our way. The bad news is that, we tend to underestimate the likelihood of bad news, and are frequently blindsided when something quite likely but very unpleasant actually happens to us.

There are benefits in this: ‘Underestimating susceptibility to negative events can serve as an adaptive function by enhancing explorative behaviour and reducing stress and anxiety associated with negative expectations’. Put another way, we would all be gibbering wrecks if we faced, every minute of our waking lives, the reality of the bad stuff that is likely to happen to us. So we don’t.

The Spanish Flu pandemic features in Chapter 8, ‘The Black Death’,  in Jonathan Gifford’s Blindsided: how business and society are shaped by our irrational and unpredictable behaviour

This article first appeared on History News Network in October 2012