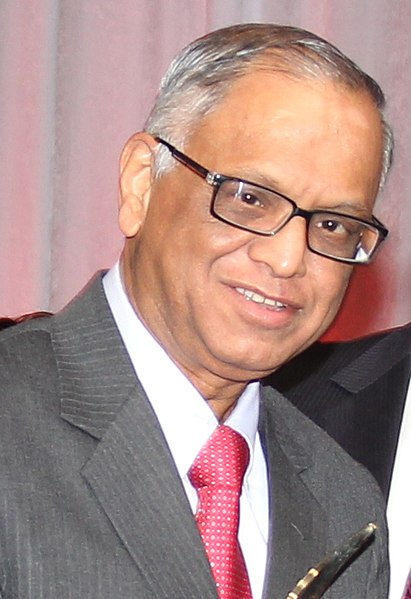 Until I read yesterday’s Sunday Times article covering Rishi Sunak’s bid to become leader of the Conservative Party, I was vaguely aware that his wife, Akshata Murty was the daughter of a successful and wealthy Indian businessman; I had no idea that her father is the legendary N. R. Narayana Murthy, cofounder of Infosys (because she uses the ‘Murty’ spelling of her surname, without the ‘h’).

I wrote about Narayana Murthy in my 2013 book for Marshall Cavendish Business: 100 Great Business Leaders. The man is a living legend – pretty impressive as a father-in-law!

You’ll see that in the text I say that Murthy and his cofounders started the company with 10,000 rupees which they had raised “between them”; I see that the 10,000 rupees was actually loaned to them by Murthy’s wife, Sudha Murty, now the chairperson of the philanthropic Infosys Foundation (no, I don’t understand the etiquette behind the different spellings of the surname).

In the late 1960s, Nagavara Ramarao Narayana Murthy was studying for a master’s degree in control theory at the Indian Institute of Technology, Kanpur, when he heard a visiting U.S. professor talking to students over breakfast about the latest developments in computer science, and in particular about how these would change people’s lives. ‘I was hooked,’ Murthy said, some 40 years later in a pre-commencement lecture to students at New York University’s Stern School of Business. ‘I went straight from breakfast to the library, read four or five papers he had suggested, and left the library determined to study computer science.’

In 1981, Murthy and six other computer engineers founded Infosys with 10,000 rupees between them (about $200 at today’s exchange rate) and built the company into a global leader in computer technology services and business consulting.

Murthy has remained a firm believer in the opportunities created by chance events. His advice to the students at Stern was that ‘the future will be shaped by several turning points with great learning opportunities.’

After his master’s degree, Murthy went to work as a systems engineer for the Indian Institute of Management, Ahmadabad. ‘We used to work 20 hours a day; go home at 3 a.m. sometimes and be back at 7 a.m.,’ he told India Seminar in 1999. ‘There was so much opportunity to learn … I learnt what it is to be an engineer. It isn’t theory but application of the theory to solve problems and make a difference to society.’

Murthy launched Infosys in 1981 with six other engineers. The team had worked with the New-York based Data-Basics Corporation company at Patni Computer Systems, and Data-Basics now wanted their own India-based software team, but were persuaded that Infosys could take on the task.

Infosys was a pioneer of the Global Delivery Model, which argues that work should be done wherever on the planet the best talent is available at the most competitive price with the lowest acceptable risk. Murthy set his sights on the global market, but establishing the company was difficult. There was a waiting list for computers – the company used time-share for its first few years and its first computer was not installed until 1984; it took a year just to get a phone line installed, because businesses were not given priority. Finance was only secured when Murthy happened to share a plane with an official from the state Industrial Investment and Development Corporation and opened the door for a proposal. In 1987, Infosys opened its first overseas office in Boston.

In 1990, the partners received an offer of $1 million to sell the company. His colleagues were tempted, but Murthy reminded them of the challenges and difficulties that they had faced so far. ‘If they were all bent upon selling the company,’ Murthy told Asiamoney magazine in a 2006 interview, ‘I would buy out all my colleagues, though I did not have a cent in my pocket.’ Murthy’s demonstration of faith changed his partners’ minds. In 1993, Infosys launched on the Indian stock exchange.

There was another pivotal moment when a major client set up a competitive pitch and drove fees down to a level where Murthy did not believe they could continue to deliver adequate levels of staff training and client service. ‘I communicated clearly to the customer that we could not accept their terms, since it could well lead us to letting them down later. But I promised a smooth, professional transition to a vendor of the customer’s choice.’ The client represented 25 per cent of the company’s revenue. Standing firm on its business model was ‘a turning point,’ said Murthy. He put in place a de-risk strategy to ensure that Infosys would never again be over-dependent on one client, country or technology.

In 1999, a listing on the U.S. electronic NASDAQ exchange delivered capital to drive rapid growth – Infosys has 67 offices around the world, including 18 in the U.S. The company has also earned a reputation for the integrity and transparency in business dealings that Murthy championed throughout his 21 years as CEO.