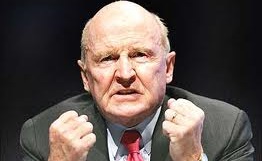 I can’t help it, but I find a lot to dislike about Jack Welch, chairman and CEO of USA giant, General Electric, from 1981 until 2001.

I think it’s Jack’s overt obsession with ‘winning’.

No doubt American readers are already thinking: ‘and that’s why you Brits are such a bunch of losers’. But most non-Brits have never quite got the point about the British attitude to winning.

Its not that we don’t want to win, it’s that we fully expect to win and we don’t want to be seen to be trying too hard. We are supposed to win, effortlessly. Which I guess makes us an arrogant bunch of bastards.

If my wife and I are slow to get out of bed in the morning, there comes a time when I will stir myself, punch the air and say, ‘Time to get up and start winning!’

My wife laughs uncontrollably at this ironic and subtle witticism, although I can’t be certain of quite the same response if I do this more than a few times per year. You can kill a good joke through over-exposure.

Jack Welch, on the other hand, is so keen on winning that he actually wrote a book called Winning.

Winning, says Jack, is what it is all about. ‘Probably no other topic could have made me want to write again,’ says Jack. ‘Because I think winning is great. Not good – great!’

‘It didn’t dawn on me that anyone would want to be anywhere but at work . . .’

And then there’s Jack’s work compulsion. Work is the most fun, apparently, that Jack has – with or without his clothes on.

‘From my earliest days in Plastics I used to show up at the office Saturday mornings. Not coincidentally, my direct reports showed up too. Personally, I thought these weekend hours were a blast’.

‘I never once asked anyone, “Is there someplace you would rather be – or need to be – for your family or favourite hobby or whatever?”’

‘The idea just didn’t dawn on me that anyone would want to be anywhere but at work’ .

Houston, we have a problem.

Jack’s idea of a reasonable work-life balance is to go home occasionally – provided he can still check his emails.

‘Technology is a real two-edged sword on this’ says Jack. ‘On the one hand, you can be home for dinner three nights a week when you have the ability to check email on your Blackberry from 8.00 to 10.00.’

Hold on. Run that past me again.

Jack thinks that getting home for dinner three nights a week is a breakthrough made possible by modern technology? So before the Blackberry did he ever go home for dinner? And it’s OK to go home in the evening now because he can check his emails all through dinner until he tucks himself up in bed with a glass of milk at ten o’clock?

And the bad news about technology?

‘You can give yourself a real ulcer by encouraging your office to call while you are skiing.’

Well, you could also get yourself killed if you answer your mobile while skiing downhill at speed. But Jack’s point seems to be that it’s OK never to see your family and to answer emails at the dinner table, but you don’t want to mess up a good skiing trip. Bad for one’s mental health. A chap has to de-stress sometime.

Jack actually takes his wife to a restaurant. Just the two of them, alone . . .

You will not be surprised to learn that Jack doesn’t let up, even on the few occasions when he actually seems to have been alone with his wife. Take this story. Jack loves this one.

Here he is, alone with his wife in their favourite restaurant, catching up with a bit of quality time together; a chance to forget all about work and concentrate on each other. Suddenly, Jack has a flip-chart moment . . . he is seized by a vision of the strategic future for GE.

‘While trying to explain the vision to my wife, Carolyn, at Gates Restaurant,’ (one can’t help but get the impression that Carolyn wasn’t quite grasping the detail of Jack’s exposition of the GE corporate mission statement. Maybe she wasn’t concentrating hard enough) ‘. . . I pulled out a black felt-tip pen and began to draw on the napkin.’

Jack, tell me this is not true.

‘I drew three circles and divided our business into one of three categories: core manufacturing, technology and services.’

This is a man who knows how to show a girl a good time.

‘Any businesses outside the circles, I told Carolyn, we would fix, sell or close.’

‘Will you really, darling? I’m so proud of you,’ murmured Carolyn. ‘Now kiss me, you mad romantic fool.’

OK. So what is there to like about Jack? Infuriatingly, he is right about some stuff.

‘Sometimes you must call a customer from the gym or check on a sick child between meetings’.

‘But the more you blend your life, the more mixed up, distracted, and overwhelmed you feel and act.’

Well, he may be onto something there. Personally speaking, I think this blurring of the edges between ‘work’ and ‘life’ is what the future will look like, and that we will learn to deal with this.

‘Only you can figure out your values and priorities. Only you know what trade-offs you are willing to make, and only you can envisage their consequences. Only you can organise your schedule and your life, at work and at home, for the balance you have chosen. This is why, at the end of the day, most bosses correctly believe work-life balance is your problem to solve, not theirs.’

Work is tough, says Jack. What does your boss want? Your undivided attention. What will make your boss consider giving you a bit of leeway that would improve your personal life? An absolutely outstanding performance at work, that earns you what Jack calls ‘chits’. ‘Make sure you work in a supportive culture where performance matters and you can earn flexibility chits with great results. Earn a lot of chits. Redeem as needed; replenish often.’

I can work with that

And on the negative (‘bad Jack’) side:
‘Below-average performers, by contrast, have three strikes against them. First, they tend to be less expert at organising their time and sorting through priorities, not just at work, but at home. Second, because of their middling performance, these people have been told they have limited chances of advancement. That lowers their self-confidence and raises their ambivalence. And finally, they’re not as financially secure [. . .] giving them fewer resources to buy work-life balance with nannies or personal trainers or whatever. Put all three dynamics together, and its no wonder underperformers struggle publicly with work-life dilemmas and ask for help so often’.

Ouch. So if you can’t get a decent work-life balance it’s because you‘re not successful enough at work. Be more successful and your boss will cut you some more slack.

It’s not a comfortable message, but it sounds like real life to me.

And just to return to my bugbear about ‘winning’.

I don’t know about you, but I’m in business to make money.

If I had a load of money already, I’d be sitting in a farmhouse in Provence reading books before having lunch with my family, probably followed by a snooze and a swim. But in the meantime I work to make money.

Do I have to be ‘winning’ all of the time that I’m doing this? Well – sort of, if you choose to define it that way. But ‘winning’ always implies that somebody else is ‘losing’ or ‘failing’: either the other businesses in your sector, or – more scarily – your own colleagues. Marking people down as failures seems to be something else that Jack is keen on – but that’s another blog.

“We don’t aspire to be as large as Wal-Mart; we know that’s not going to happen. We want to be the best retail company we possibly can be. So we’re focused on our demographics in servicing our guests the best way we possibly can. We know that if we can do that then we’re going to be very successful as well. It’s not a zero sum game. It’s not as if Wal-Mart wins and everybody else loses. There’s a lot of great retail companies and we believe that if we can effectively compete with Wal-Mart and stay true to our strategy, we will be highly successful over the next couple of decades.”

Me? Like the immensely wealthy Mr Steinhafel, I just want to be successful – in life as in work. I don’t have to win. But I do have to succeed – and I have to make it look easy.