Jack Welch on change and candour (v good) and on ‘differentiation’ (hmm . . .) 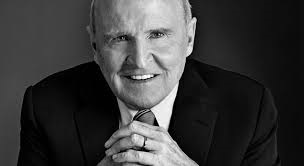 Jack Welch was, of course, CEO of America’s General Electric corporation (GE) for twenty years, from 1981 to 2001. During his tenure, the market capitalisation of GE rose from $14 billion to $410 billion, making GE the most valuable company in the world. That’s why you hear a lot about Jack Welch.

One of the best characteristics of Jack Welch, perhaps his defining characteristic, is his love of change. Welch didn’t just embrace change where necessary; he actively looked for change at every opportunity. He was also a great believer in ‘candour’ and he applied this belief to every element of his business, to every business meeting and to every appraisal. Candour, says Welch, generates ideas and speeds things up. It also saves money: you will never know how much money you save, says Welch, but “think of how it eliminates meaningless meetings and b.s. reports that confirm what everyone already knows.” (I can’t help but notice that many Americans liberally sprinkle their speech with commonplace profanities – especially ‘shit’ and ‘bullshit’ – but that they have a strange taboo about writing the words down. I blame the puritan heritage.)

This is at the heart of what Welch means by candour – and we can all recognise it. Think of all the meetings, all the long presentations, that you have sat through which do not challenge any fundamental assumptions; that gloss over weakness and failures as ‘a good effort, considering the considerable difficulties faced by the business.’ Meetings that are essentially self-congratulatory and which hope not to rock the boat; meetings that aim to ensure that everything carries on pretty much the way it did before.

Welch hates all of that. And I mean: he really hates it. It’s a bit scary, but it’s also impressive. He recognises the social factors that make us reluctant to make harsh judgements or to deliver honest judgments in day-to-day life: the human tendency to sugar the pill and to put a gloss on unpalatable truths. This, says Welch, happens in business too. But how much more exciting would it be, he says, if we were to throw all of that away; to address issues head-on and to ask some tough but interesting questions on every possible occasion.

Welch gives examples: a meeting is going on in the normal way, with the team presenting their heroic efforts against the almost insurmountable problems that they have faced along the way and saying, in summary, ‘Hey, we’re not doing to badly here’. Welch confess to having sat through many such meetings, nodding and smiling along with the other managers. But then he realised that it could be different. Management could ask some much more challenging and difficult questions: “Isn’t there a new product or service area in this business somewhere that we just haven’t thought of yet?” “Can we jump-start this business with an acquisition?” “This business is taking up so many resources. Why don’t we get the hell out of it?’

You can see why many GE employees did not find Welch an easy man to get along with.  And it is my belief that Welch’s love of candour and his love of change are, essentially, the same thing. ‘Don’t tell me what I want to hear,’ says Welch, ‘tell me the truth. And now that we have the truth, let’s look at it carefully. Are we happy with things being this way? Do we wish things were different? What can we do about it?’

Welch’s constant probing into the genuine progress of any business didn’t end there. In terms of business, he said, the only measure of real performance was how the business was performing against its competitors, out there in the real world. ‘Doing better than last year’, or ‘Being ahead of budget’, or ‘Doing well in very tough circumstances’ didn’t cut the mustard with Jack.

“Are we number one or number two in our market?” was all he cared about. And when managers started to define their markets so tightly that they did, indeed, have the necessary market share, Jack fixed this very neatly by ruling that  markets had to be defined so that no business had more than a 10% share in that market. Suddenly the market was much bigger. Same question: “Are we number one or number two?”

Differentiation: The good, the middling and those about to die . . .

Jack ‘differentiated’ his businesses into good, middling and poor performers. And then he applied his famous ‘fix, sell or close’ mantra to those  businesses that weren’t making the grade.  It’s rigorous and it certainly worked.

But then Welch decided to apply this principle to his management team. Every member was graded as being in the top 20 percent, the middle 70 percent or the bottom 10 percent. And the bottom ten percent had to go.

At first glance, that doesn’t seem that unreasonable. Harsh but arguably fair. But this process is annual. It happens every year, without fail.

As Jack himself says: “The first time new managers name their weakest players, they do it readily. The second year, it’s more difficult. By the third year, it’s war. By then the most obvious weak performers have left the team, and many managers can’t bring themselves to put anyone in the C column. They’ve grown to love everyone in their team. By that third year, if they have 30 people in their management group, that often can’t identify a single bottom 10 percent player, much less three of them”.

But they have to. Jack sends them back until they identify the bottom ten percent. No bonus deals are signed off for good performers until the bottom 10 percent are identified and got rid of. Jack says that it is ‘false kindness’ to keep on people who are not going to thrive in the company. Managers who are genuinely unable to identify the necessary 10% who are heading for the door are likely to find themselves heading in the same direction, having revealed a lack of the necessary fibre.

But what if, after a few years of annual culls, the team is actually really strong from top to bottom? What if there really isn’t anybody who is not good enough to grow and prosper? And what is wrong, for goodness sake, with your recruitment, appraisal and training processes, if 10% of senior staff need to be sacked every year, without fail?

Mr Welch would, I am sure, lump me together with the wishy-washy liberals who were unable to finger 10% of their top teams and were therefore given the old heave-ho themselves. And the worst insult that I can possibly offer Mr Welch in response (which would shock him deeply, and for which I apologise in advance) is that there is something about this kind of ‘differentiation’ that reminds me irresistibly of that most chilling of concepts: the ‘quota’, beloved of communist regimes. A meaningless number that must be delivered, regardless of the realities of the situation, because the glorious leader has said that it will be delivered.