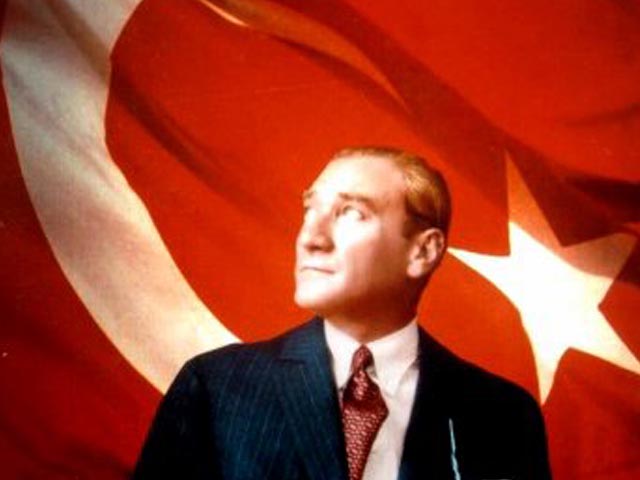 Mustafa Kemal created modern Turkey. He salvaged the nation from the wreckage of the Ottoman Empire at the end of the First World War, when the ailing empire – ‘the sick man of Europe’ – was being carved up by the victorious allies. He achieved this in the face of apparently impossible odds. ‘What we want to do, in our situation, is explainable neither in military not in any other terms, but in spite of everything, we are going to do it, to save our country, to establish a free and civilized Turkish state, to live like human beings. If we can’t succeed, we prefer, being the sons of our forefathers, to die fighting.’

Leading from the front

The Allies’ peace treaty with the Ottoman Empire at the end of the war divided Anatolia, the traditional homeland of the Turkish people, into a collection of territories controlled by Britain, France, Italy, Greece and Armenia. A central area on the southern border of the Black Sea was to be Turkish; the area around the strategically vital Dardanelles and the Sea of Marmar – the sea route between the Mediterranean and the Black Sea – was to be under international control, including Constantinople, capital of the Ottoman Empire, controlling the final narrow sea passage into the Black Sea itself.

One man prevented this international carve-up and created the Republic of Turkey: a young Turkish officer called Mustafa Kemal.

Kemal had always led from the front. He showed conspicuous bravery and great leadership skills during the Allied invasion of Gallipoli at the start of World War I – Winston Churchill’s botched attempt to seize control of the Dardanelles, planning to use control of the straits in order to ferry troops from the Mediterranean to the Black Sea to support Russian troops on the war’s Eastern Front, taking pressure off the Western Front in northern France. It was a typically Churchillian plan; bold in its scope and vision but flawed and poorly planned.

At the outbreak of war, the Ottoman Empire had sided with the ‘Central Powers’ – Germany, Austria-Hungary and their empires – and Kemal was posted to Gallipoli to resist the Allied landings.Turkey mounted a brave and well-organised defence. Opposing the landing of Australian troops, Kemal exceeded his authority by ordering his best regiment, the Fifty-Seventh, to move up to high ground commanding the landing area. In his order of the day he wrote, ‘I do not order you to attack, I order you to die. In the time it takes us to die, other troops and commanders can come and take our place.’

Most of the Fifty-Seventh did die in that battle, but the Anzacs were so shaken that their commander asked that night to be evacuated. They were instructed to hold on and dig in because other attacks would, in theory, take the pressure off their beachhead. The Turks also dug in.

A German commander was impressed by Kemal: a ‘clear-thinking, active, quiet man who knew what he wanted. He weighed and decided everything for himself, without looking elsewhere for support or agreement to his opinions.’ What Kemal wanted was for his troops to push the invaders back into the sea or die in the attempt.

Kemal demonstrated his own readiness to die with conspicuous bravery and sang froid. As a succession of shells dropped in a pattern ever closer to his trench until it was a certainty that the next would be a direct hit, he refused to take cover: ‘It’s too late now. I can’t set my men a bad example’. By chance, there was no next shell.

The end of the Ottoman Empire

The Ottoman Empire that was, in effect, destroyed by the First World War, was the remnant of a glorious Islamic Empire that had lasted for over six hundred years. The empire had sided with the losers, and was greatly weakened by the war itself. The triple Entente of Britain, France and Italy had been planning the partition of the ailing empire since early in the war. The oil deposits of the Middle East were the main focus, and there were other territorial interests in the Empire’s previous territories from Italy, France and Greece. The finances of the empire were to be controlled by the Allies. The straits between the Black Sea and the Mediterranean were to be international waters; certain ports, including Constantinople, were to be international Free Ports.

Britain was given a mandate in Mesopotamia, with an oil concession granted to the Turkish Petroleum Company (later renamed as the Iraqi Petroleum Company). Britain was also to administer Palestine. The land that could be described as ‘Turkey’ was about to cease to exist.  It would have done so, had it not been Kemal, one of the few men of modern times to have created a nation state, for which he is honoured with the name Atatürk: Father of Turkey.

With a few remnants of the army that had fought in the Great War, Kemal set up an alternative government in the interior and, by single-handedly bombarding the Sultan’s government with telegrams exaggerating the power, military capacity and influence of the Nationalist Party in the country’s interior, he brought about the resignation of the Sultan’s chief minister, the Grand Vizier, and the promise of new elections. The Nationalist Party won a majority. British troops invaded Constantinople and dissolved the new Parliament.

Kemal retired to the interior again and built up the army, fighting a stubborn resistance against Greek forces that began to spread throughout Anatolia to claim territory for Greece. Kemal inspired a heroic resistance and finally forced the Greeks to abandon Turkey. The British signed an armistice and a new treaty recognised the independence of the Republic of Turkey.

Few leaders have featured quite so prominently at the forefront of an entire movement: Kemal had decided that a Republic of Turkey should be established; he brought it into being by the force of his will and his inspiring leadership. He then transformed the nation, economically and socially. He abolished the Sultanate and established a secular state. He set up a one-party state and a kind of state-sponsored capitalism, established universal suffrage for both men and women (enfranchising women before, for example, France or Italy) and laid the foundations for the multi-party democracy that would emerge after Kemal’s death.

Mustafa Kemal is featured in Section 4 of History Lessons: Leading from the Front