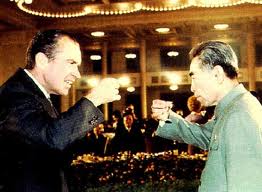 Zhou Enlai was Premier of the People’s Republic of China from the moment the Chinese Communist Party achieved power in 1949, following their defeat of the Nationalist government, until his death in 1976. A dedicated and lifelong communist, Zhou Enlai’s political instincts were moderate and progressive. Famous for his punishing work routine, intelligence and subtlety, Zhou worked all of his life to improve the condition of the Chinese people and was to become famous for his diplomatic skills in opening a dialogue with the West after the political conflict created by China’s involvement in the Korean and Vietnamese wars.

Throughout all of his time as Premier, Zhou reported to Mao Zedong (often written as Mao Tse-tung), Chairman of the Communist Party of China. Mao had begun his rule of China with a series of vicious purges of opponents. In the late nineteen-fifties, Mao proposed a disastrous programme of agricultural collectivisation and ideologically-driven peasant initiatives, such as a plan to produce steel in makeshift furnaces in villages across China (or for peasants to construct canals without interference from ‘bourgeois’ engineers). Unfortunately, it is only possible to make steel under controlled conditions at consistently high temperatures – something that, ironically, the ancient Chinese had fully understood. Woods were cut down, labour was diverted from agriculture, and the end result was a great deal of nearly worthless pig iron. Local communes over-reported the amount of food that they were producing in an attempt to be seen to be meeting their targets, and were then required to hand a percentage of this inflated amount to the state to feed the cities. The so-called ‘Great Leap Forward’ resulted in a famine that is estimated to have caused the death of between 20 and 43 million people. Mao’s various purges of political opponents, ‘middle-roaders’, intellectuals and recidivists killed millions more.

Out with the four olds!

Mao decided that the country was in danger of losing its revolutionary zeal. The Party, and the country, must be purged by a brief spell of violent anarchic change, driven by the people. Students, peasants, workers and soldiers were called upon to abolish the ‘Four Olds’: Old Customs, Old Culture, Old Habits, Old Ideas. The Red Guards—a term used for all young people embarking on Mao’s new mission—were offered free travel to anywhere in the country. Exhilarated by their new powers and fired up with revolutionary fervour, they began to take China down the road of mere anarchy.

Tribunals were set up to ‘try’ capitalist-roaders and anti-revolutionaries. Teachers, academics, writers, journalists were attacked; museums, temples and shrines were ransacked; ancient books and works of art were destroyed. There were many suicides and murders. Party members were sent to detention camps, where many died. Future Premier Den Xiaoping was sent for ‘re-education’, ending up as a worker in an engine factory (he was later rescued by Zhou and brought back into politics).

Throughout these terrifying times, Zhou trod a difficult path, rescuing those whom he could, but not stepping so far out of line that he became an easy target for the Red Guards, though there were virulent campaigns against him. Zhou closed museums to protect their contents and drew up lists of temples and shrines that were to be preserved as national treasures. To save politicians, his favourite ploy became the despatch of those at serious risk to ‘Hospital No. 301’ – a hospital reserved for high-ranking party members – citing some supposed illness of theirs. They were to emerge, years later, miraculously cured.

The Gang of Four

During the Cultural Revolution, Mao’s last wife, Jiang Qing, had become a power in her own right at the head of the infamous Gang of Four. At the height of the chaos, Red Guards were given the political sanction to seize weapons from the army – the ultimate symbol, after all, of hierarchical authority. They began to overthrow local governments and to take control of factories. Rival Red Guard factions began to shoot each other with liberated weapons. The Gang of Four were ecstatic: here was true people’s power, unmediated by any Party, government or military involvement.

Zhou presented the figures on the economy to Mao. Production was collapsing; the Chinese economy was facing ruin. Mao called on the People’s Liberation Army to end the Cultural Revolution. A whole generation of dangerous Red Guards were sent off to work in the country in the charmingly named ‘Down to the Countryside Movement.’

With Mao’s health declining (though he was to outlive Zhou by eight months) the Gang of Four remained in effective power, and the Cultural Revolution is deemed to have continued up until Zhou’s death in 1976. After his death, the traditional annual day of mourning became the occasion for a massive national show of respect for Zhou. The Gang of Four cleared Tiananmen Square, where huge crowds had gathered, and arrested Zhou’s old political ally, Deng Xiaoping. But the Gang’s power was broken by this demonstration of national feeling. Deng was to rise to power in 1978; the Gang of Four were arrested, tried and imprisoned. All served their sentences and were released, though Mao’s wife, Jiang Qing, committed suicide in 1991. A year after Mao’s death in 1976, Deng Xiaoping became the effective leader of China. He denounced the Cultural Revolution, launched the liberalising ‘Beijing Spring’ and opened China to foreign investment and international markets. Zhou Enlai became increasingly revered as the ‘Beloved Premier’ who had worked to mitigate the previous regime’s worst excesses and had doggedly persisted with his own agenda of laying the foundations for future modernisation.