April 2nd, 1801. ‘I see no ships’: Horatio Nelson turns a blind eye at the Battle of Copenhagen 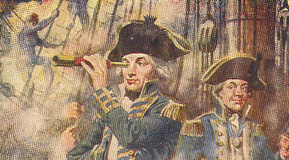 Horatio Nelson, who would become Admiral Lord Viscount Nelson as he was successively promoted and honoured by the Royal Navy and a grateful British nation, was a consummate leader of men. A brilliant strategist, politically well-informed and adept, he was always likely to achieve a senior role in the navy.

What set Nelson apart, however, was his determination to lead from the front.

His intelligent and sympathetic management of his fellow officers led to the notion of the ‘band of brothers’, a team of highly-motivated officers who had been schooled in Nelson’s strategic thinking and tactical expertise, but who were given complete freedom of action in the heat of battle.

But it was Nelson’s astonishing bravery and his determination to engage the enemy that earned him the adulation of his men.

‘Thank God, sir, you are safe’ 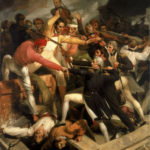 Nelson fighting the Spanish at CAdiz 1797

In one desperate skirmish against the Spanish at Cadiz, which led to hand-to-hand fighting on small boats, Nelson’s life was saved by his coxswain, John Sykes, who used his bare arm to parry a sword blow aimed at Nelson’s head. ‘Thank God, sir, you are safe’, said the badly wounded Sykes.

Nelson was determined to succeed. Elements of vanity and a burning desire for recognition seem to have fuelled his ambition. He was prepared to ignore orders – or, at least, to choose to interpret orders in a way that would allow him to cover himself in glory without, hopefully, facing a court-martial. Ship-to-ship signalling by flags allowed for a degree of ambiguity in the interpretation of signalled orders and in the smoke of battle, flags were often impossible to see.

A cavalier approach to orders

The best-known example of Nelson’s apparently cavalier approach to orders is, of course, the Battle of Copenhagen, at which Nelson put his telescope to his blind eye and announced that he could not see the signal calling on him to end the action and retreat (Nelson had lost the sight of one eye during an shore attack on Cadiz, when a cannonball impact sprayed sand and pebbles into his face).

Britain, at the time, was at war with Napoleonic France and the Royal Navy was attempting to prevent neutral ships from trading with the French Republic. Ships were intercepted and their cargoes seized. Denmark and Sweden had been persuaded by Russia to join a ‘League of Armed Neutrality’ which would defy this embargo. The League’s hostility to Britain threatened supplies of timber from Scandinavia, essential for the maintenance of the navy’s fleet of wooden ships. Britain launched a naval attack on Denmark.

An honourable route out

The Danish fleet was drawn up in a formidable defensive position off the city of Copenhagen, situated on an island between the mainland of Denmark and Sweden that can only be approached by sea through a narrow and treacherous channel. Nelson’s fleet fought its way doggedly up the straits, each British ship anchoring within canon-shot of its Danish counterpart to begin a punishing exchange of broadsides.  Several British ships ran aground in the uncharted shallows.

After three and a half hours of firing, the British Admiral, Sir Hyde Parker, offered Nelson an honourable route out of this bloody action. Parker is normally cast as the villain of the piece for foolishly recalling Nelson on the brink of victory, but his motives were good: he feared that Nelson’s attack had stalled and that Nelson would be unable to retreat without an order to do so. He explicitly hoped that Nelson would ignore the order if able to do so.

‘I really do not see the signal’

In fact, a retreat would not only have wasted the initiative, but Nelson’s ships would have been forced to retreat across the line of fire from a still-active section of the Danish defences. Nelson turned to his flag-captain and said, ‘Foley, you know that I have lost an eye, and have a right to be blind sometimes’.  Then he did raise his telescope to his blind eye and said, “I really do not see the signal.”

Nelson went on to win the battle and to negotiate an armistice, followed by a peace agreement. The phrase ‘to turn a blind eye’ had entered the English language. Admiral Parker was deemed by the Admiralty to have shown a lack of vigour in the overall campaign and was recalled; Vice-Admiral Nelson took over his command.