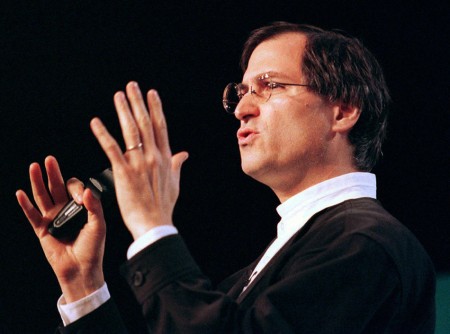 The very real animosity that existed for so many years between Apple and Microsoft, both at an organisational level and amongst users, has created a lasting legacy. Either you are an Apple kind of person, or you are a ‘PC’ kind of person. Using one or he other of these machines is still felt to define the kind of person you are.

Apple themselves spent millions of dollars on advertising, encouraging us to take sides: Apple’s famous 1984 advertisement portrayed Apple as the rebellious free spirit taking on ‘Big Brother’: the IBM PC with its Microsoft-supplied operating system. Apple’s later ‘Think Different’ campaign worked hard to imply that the real geniuses in this world – the ones who changed the world by being foolish enough to think that they could change the world – would never have been seen dead using a Microsoft-empowered PC, rather than a Macintosh.

Perhaps as a result, we tend to forget that Apple co-founder Steve Jobs forged a very pragmatic but deeply unpopular alliance with Microsoft after his return in 1996 to the company that he had founded twenty years earlier. The announcement, made to the 1997 Boston Macworld Expo, so shocked the audience that the unthinkable happened: Steve Jobs, the already semi-mythical founding father of Apple, was booed.

In the popular imagination, Steve Jobs was not only the co-founder but also the presiding genius of Apple, the quirky, creative corporation that was (so the story goes) the antithesis of everything that Microsoft stood for. Jobs, in this version of reality, started Apple in a garage in Silicon Valley with his friend Steve Wozniac (that much is true, and worthy of legend) and built it (with a few rather violent hiccups along the way which tend to be glossed over) into the world’s most valuable company. Driven, uncompromising, brutal yet inspirational, Jobs inspired his organisation to ever greater heights of creativity, driven by his own remarkable vision of how things might be, rather than how things currently were.

I wouldn’t want to argue with much of that analysis, but it is worth remembering both that Jobs was effectively fired from the company that he had created for being a divisive and unrealistic project manager and for having become the chairman from hell, and a serial corporate plotter, and also that when he achieved the astonishing feat of returning from the wilderness to become Apple’s de facto leader (as opposed to being its co-founder and then chairman), he set out to do the unthinkable – to make a partnership with Microsoft. Apple staffers booed Jobs when he made the announcement at the Macworld Conference in Boston in 1997. The fact that Apple was nearly bankrupt and that the deal was a lifesaver didn’t fit with their world view, in which Apple were the good guys and Microsoft was the evil empire. Time was to prove that this was one of the many decisions that Jobs called absolutely correctly.

A keyboard and a screen!

Jobs founded  Apple Inc with Steve Wozniac in 1976 to launch the Apple I Personal Computer Kit: an assembled circuit board. The next product, Apple II, represented a huge leap forward. It was the world’s first commercially successful personal computer, incorporating such radical features as a keyboard, a screen, a case and twin floppy disc memory drives. The new company went public in 1980, generating more capital than any stock market launch since the Ford Motor Company in 1956, and creating about 300 new millionaires overnight. In 1985 Steve Jobs was removed from managerial duties in a boardroom power struggle with John Sculley, whom Jobs himself had appointed as Apple’s CEO, and resigned from the company that he had created.

Eleven years later, in 1996, when Job’s subsequent venture, neXT Computer, was bought by Apple, Jobs finally emerged as Apple’s CEO, a role he had never previously held. (Along the way, Jobs bought a computer animation company from George Lucas  called The Graphics Group, which he turned into Pixar – but that’s a different story.)

With Apple struggling and near bankruptcy, one of Jobs’s first actions was to arrange a strategic partnership with the software giant Microsoft, with whom Apple had been engaged in a drawn-out and costly series of legal wrangling over patent rights. In 1997, at the Boston Macworld Expo, Steve Jobs took to the stage to deliver one of his famous keynote speeches. He stunned his audience—for whom the world had become defined by the struggle between the underdog Apple and the increasingly all-powerful Microsoft Corporation—with the following announcement.

‘Now, I’d like to talk about meaningful partnerships’, said Jobs.

‘Apple lives in an eco-system and it needs help from other partners; it needs to help other partners. And relationships that are destructive don’t help anybody in this industry as it is today. So during the last several weeks we have looked at some of the relationships, and one has stood out as a relationship that hasn’t been going so well, but that has the potential, I think, to be great for both companies. And I’d like to announce one of our first partnerships today, a very very meaningful one. And that is one with Microsoft.’

As he began to summarise his announcement, Jobs said:

‘We have to let go of this notion that for Apple to win, Microsoft has to lose . . . the era of setting this up as a competition between Apple and Microsoft is over as far as I’m concerned. This is about getting Apple healthy and [. . .] about Apple being able to make incredibly great contributions to the computer industry, to be healthy and prosper again.’ 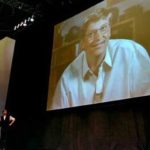 Bill Gates on videolink at Macworld 97

The deal set up a number of arrangements for the cross-licensing of patents. It guaranteed that Microsoft would continue to release Microsoft Office products for the Mac platform. Apple undertook to make Microsoft’s Internet Explorer the default browser on all new Mac products. Microsoft also bought $150m of non-voting Apple shares at market prices and undertook not to sell them for three years. Microsoft now had a vested interest in seeing Apple’s share price increase, rather than collapse. When the market heard about the deal, Apple’s stock rose by 35%.

Steve Jobs was a dreadful manager – visionaries generally are. But he was certainly a great leader.  Forging strategic relationships – with major competitors if necessary – is one of the hallmarks of great leadership.

These ideas are explored further in chapter 98 , ‘Look for Partnerships’, in 100 Great Leadership Ideas